Last year I used Hansons for two cycles to PR at the Half distance. While I enjoyed it, I needed a plan that had two days off rather than one. After some research and talking a lot to other seasoned Marathon runners, I picked the Pfitzinger plan.

Here’s a short snip of the start of the plan that I created to fit into my schedule:

I went into the plan running an average 20 miles per week consistently for two months before starting. I would not recommend the 18/55 plan for a person that is starting with zero mileage weeks, since you’re into 40 mpw by the 3rd week.

The first two weeks that were in the 40 mpw range hurt, as I was not accustomed to the training volume. Thankfully with this plan, once you scale up, there is a rest week that has reduced mileage. The same sentiment was repeated when I got into the 50 mpw cycles.

My appetite increased (second lunch or second dinners were becoming common), I needed more sleep, and I was seeing a physical therapist every 3-4 weeks to help massage out any tough spots in my legs. I kept weight training to one session a week with light weights. My routine focused on hip adduction/abduction, lunges, box jump routines, and resistance band work since I have a weakness in the gluteus medius on my left side.

One word — discipline. I missed one workout and I ran rain or shine. Period. That was the only way for me to chip away at the miles. The worst sessions were the Tempo sets in Chicago over the summer where the heat would get past 90F/32C. I resolved myself to getting up before the sun or wait until late in the evening to do any speed during the hot weeks.

The best sessions? I have to say that Recovery and the Longs. I needed to practice taking in nutrition, since I was coming from a Half background, so a no consequence Long run to test out food was a welcomed experience.

Here’s how my paces ended up towards the end of the training cycle:

A few weeks out, I felt like the pace range for the Full was going to be somewhere in the 7:00 to 7:30 range. I wanted to wait until the taper period to make a final decision.

It’s huge and really well run! I took a ride share to the venue, got my race packet, and was out within 40 minutes. I never like to loiter around at expos as I feel they mentally drain energy out of me.

I went to the Nike Pace Team booth at the Expo and grabbed a pacing sticker for the 3:15 pace group. Done. Decision made.

Early wake up and got some nutrition in my body. For me the standard race breakfast is a bagel with a lot of peanut butter, a banana, and touch of yogurt with lots of chocolate chips.

I changed into my gear and had a little bit of race nerves, nothing too abnormal for what was about to happen. I took the Brown Line down to Library and walked over to the entrance gates.

I did not bring a bag to check and discovered that there was an “Express” line for people with nothing to check. It took me about 15 minutes to get though the security line and on my way over to the Corral areas. I highly recommend not bringing anything to check at this race. There is so many aid stations with water/electrolytes that you really only need to carry your choice of food in your pockets.

Submitting a 1:26 Half was able to qualify me for Corral B. Get into this Corral if you can. It is sectioned off and has a its own bathroom and warm up area away from the other corrals. Looking around the field, the majority of the runners in B looked to be in the 3:00 – 3:30 pace range.

Given that it was a chilly morning, I brought a throw away t-shirt that I kept on until 20 minutes before the start time. I did about a mile jog around the corral area, and was feeling pretty fresh. Just enough to feel a start of a light sweat is enough warm-up for me on a race as long as this.

My goal for this race was to arrive at the start line rested, settled stomach, and with uninjured legs. Three check marks for all of theses so I was in high spirits!

I had two goals for this section — go out at a conservative pace and not to obsess over the split times for the first few miles. I wanted to lock in a good mental attitude and cadence during the section.

The tall buildings in River North and the Loop make accurate GPS signaling impossible for the first few miles. At some points I was running a 5:30 mile, others a 11:00. Thankfully I’ve been running for long enough that I know that a 7:20 ~feels~ like, so I just listened to my body and ignored the watch.

The general mass of people started to inch ahead of me every so slowly and I had to not let that bother me. I thought I was really lagging into the high 7’s per mile, but from what I learned as the race progressed, the majority of people in Corral B were trying for times between 2:50 and 3:10. I discovered that the Nike 3:15 pace group started in Corral C, so I should have started in that corral for my 3:15 goal.

Marathon Guardian Angel — A fellow runner came up to me and asked me for my goal pace. Since we were both aiming for a 3:15, we decided to pace together. He was a seasoned runner and ran with me for 20 miles. We stopped at every other aid station for aid, shared stories, ate candy, and kept my spirits up. The miles just melted away as we ran together.

One of my favorite areas since I went to college in Chicago, so running around Lincoln Park and Lakeview brought back a lot of memories. This was one of the reasons that I was excited to run this race.

Given that I was running 45-55 miles per week and properly tapered, hitting the Half felt very easy and more like a regular jog than a race. With spirits high, I started the back half of the race, knowing that the pain was going to hit once the distance got into the 20+ miles.

West out on Adams St, down Damen Ave, and then Jackson East to Halsted. Had a small stomach stitch for most of this, but knew that it would go away eventually; I’ve run though worse. There were some sporadic crowds in the University Village area. From what people have told me, the support in the section has improved every year.

Once I hit 2 hours and 30ish minutes on the clock, I felt a change in my body. General fatigue, the lactic buildup in the legs, my heart and breathing rate increased. I knew this was where the real pain of the Marathon distance was going to start.

Just not fun. The support after Chinatown is lacking, the course tracks the Expressway, the cold winds were becoming more and more abrasive to my spirit, and everything started to hurt. I didn’t hit a hard wall or bonk, the additive fatigue of the distance started to chip away at me. I knew that if I listened to my legs and stopped, the rest of the race would be a difficult run-walk, start-stop experience. I did fast walk and grab extra hydration during this section and started a good shuffle between 8-8:30 pace for this section.

The penultimate section. The 3:15 goal was out of reach and I knew that I was going to land around the 3:20ish mark. A urban corridor of tall buildings, gusting chilly winds, and crowds telling you that the end is near. I was in a lot of pain, yet still had a smile on my face as I shuffled along.

Listen Midwestern people, this is not a “hill”. Yes, it is at the end of the Marathon so it seems like a insurmountable challenge, but it’s actually not that bad. I felt beat up from all the flat running, which is just so bio-mechanically taxing and wanted to give the bridge some effort. I actually enjoyed going up and down over the bridge at this point just because I got to change my stride a little.

Crossing the finish line was pretty emotional for me. The end of the training cycle, my first Full Marathon, and returning to my old stomping grounds to race. I was pretty saturated with endorphins after crossing, so I teared up a little.

The aid at the end of Chicago is very impressive. The finish area has many volunteers that are watching for anyone needing assistance. I waddled out of the area and took about 10 minutes to sit on the grass to collect myself. 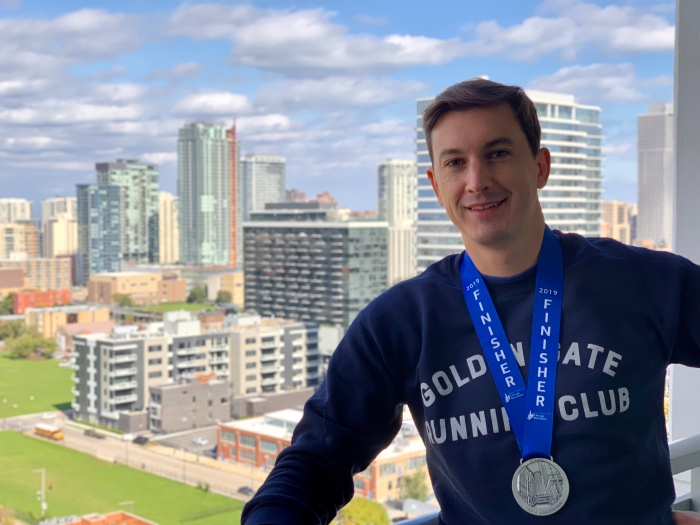 Lots of water, banana, and some electrolytes. I walked over to the Brown Line and took the elevator up to the platform. Eventually got home and wobbled into the shower. I felt hungry and ready to eat, which is a really good sign for me post racing. I crashed early and slept for about 10 hours the first night.

I had to spend a lot of time running to prepare for this race, so a big thanks for all the people that tolerated my absence, me complaining about fatigue, and guiding me though rough patches during the training cycle. Though I was out running my race alone, the help and support of everyone was carrying me to the finish.

Would I do another Marathon? Not at this point. I want to take a year or two to switch it up and focus back on trails.